Why is the project needed?

The A386 between Tavistock and Plymouth is the only real route choice that people currently have for connecting between the two settlements, whether using private car or public transport. This is due to the narrow and very convoluted nature of other routes in the area. The A386 becomes congested during the morning and evening peak hours and is hard to improve due to the fact that it travels through Dartmoor National Park.

In light of the increased population and traffic anticipated to result from the new development in Tavistock, and the constraints to improving the road routes, using the historic railway line is a viable alternative to alleviate transport pressures. This will also support economic growth and development in Tavistock whilst increasing the potential to improve employment investment within Tavistock.

What does the project consist of?

The project consists of the re-instatement of the railway between Bere Alston and Tavistock and Walking and cycling trails.

The rail part of the project will comprise of a new single track railway line. The new track will run along the historic route, from the new station which will be located within a new development south of Callington Road, to the existing station at Bere Alston, which will be improved to increase capacity.

Although use of the track ceased in 1968 the formation between the two stations remains largely intact. The route will run through deep railway cuttings and embankments giving striking views over Dartmoor to the east and the Tamar Valley to the west. It will cross the steep sided valley of the River Lumburn using the listed Shillamill Viaduct and also pass through the dramatic Shillamill Tunnel. The route as a whole will provide attractive views of Tavistock Canal and the Tamar Valley Area of Outstanding Natural Beauty.

The walking and cycling trails linking Tavistock into the area south and west of Tavistock will improve sustainable access for all, enabling greater access to the Tamar Valley Area of Outstanding Natural Beauty and Cornwall and West Devon Mining Landscape World Heritage Site. 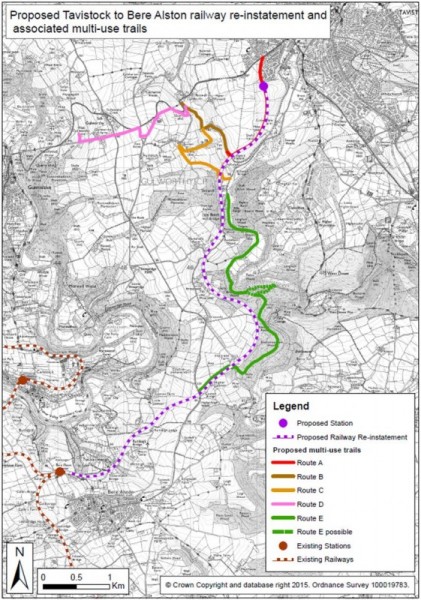 Although the route has historically been utilised by the railway alternative options were available and thus were fully investigated to provide the most favourable option. All options are outlined in detail in the Options Assessment Report, with those looked at including; a light railway, tram-train, guided bus along former rail route, bus link on former rail route, road link on the former rail route, A386 highway improvements, A386 bus services and the re-instatement of the railway. All were assessed against a suite of criteria with the railway scoring the highest. More detail in relation to each option can be found within the report including estimated costings of construction and operation.

Re-instatement of the railway between Tavistock and Bere Alston involves the construction of a rail route over two kilometres in length (indeed, it will be approximately 8km) on land that has not recently been used as a railway. As such, it qualifies as a nationally significant infrastructure project. This means that it requires a development consent order (DCO) to be granted by the secretary of state, and an application must be made to the Planning Inspectorate. The project must therefore undergo a 6 staged decision-making process. The stages are as follows:

More details can be found on the National Infrastructure Planning website, with two helpful videos which further explain the process.

Currently the Drake Line is in stage 1.

customer@devon.gov.uk | 0345 155 1015
Disclaimer | Privacy | Cookies | Copyright | Security | Accessibility
Beta
PLEASE BE AWARE - this is a test website. It may contain inaccuracies or be misleading. www.devon.gov.uk remains the official website for county council information and services.