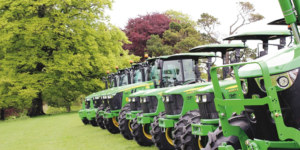 The UK agri-food sector is a core part of both the UK economy and food security for the nation, and within the SW region contributes additionally to the landscape value and natural capital upon which tourism and creative industries are also based. In the UK the sector employs 3.9 million people or 13.2% of the total workforce – in the South West this is primarily around the diary and sheep sub-sectors due to the temperate climate and higher than average UK rainfall.

The South West contains upland areas such as Dartmoor and Exmoor with very high rainfalls, ericaceous soils which support lower productivity cropping, as well as acting as a carbon sink with peat. Due to its southerly position, the region also has higher than average sunshine hours ratio, enabling fast growing conditions and low frost frequency which suits fertile grasslands and arable areas.

This affects the agriculture in the South West, as does the geology and geomorphology of the hills and valleys. Steep gradients and winding lanes suit smaller scale mechanisation rather than large agri-business, and the average farm size in the region is still relatively small compared to (for example) East Anglia as a result.

These factors combine to provide the UK’s core dairy region, producing over £1B cheese annually and a vibrant and effective food sector, with high welfare and provenance with significant wider export potential.