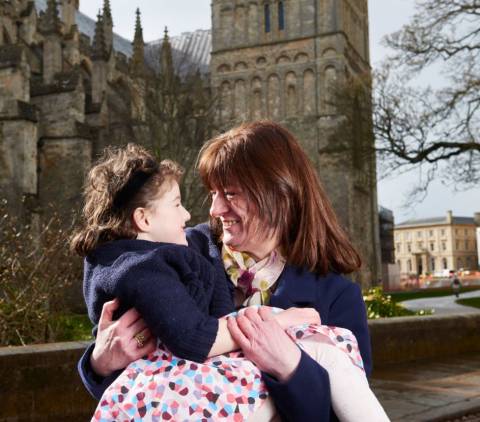 Growing up in a family of eight siblings was competitive and exciting. I always knew that I wanted a child but as a single person in full-time employment, I had no idea how to go about it. I wasn’t even sure if adoption might even be a possibility for me.

One day, I plucked up courage and telephoned the local council who immediately suggested that as a single mother, I think about fostering, but that was not an option for me. Fortunately I wasn’t put off.

A great friend, Anita had adopted one child and was in the process of adopting a second. When I was visiting her, we discussed what my options for adoption might be.

It was while we were looking through some old journals issued by Adoption UK, I saw a photograph of Kirsten an eighteen-month-old child with foetal alcohol syndrome. I know it might sound crazy but I knew immediately that I had found my daughter.

Anita, who had been adopting via the organisation, Families for Children, suggested that I spoke to them. So I phoned them and poured my heart out to Bean, a social worker who worked there. He was incredibly kind and said “Well Elizabeth, I won’t say yes or no but we will send a social worker round to visit you.”

So in August 2010, my journey started. I was CRB checked, had to attend a medical with my GP, had interviews with social workers, references were given by my work as well as five people who knew me. It was a rigorous process but they had to be sure that I was the right parent for Kirsten.

In October 2010, I showed Kirsten’s profile in the journal to my social worker. She suggested that by now Kirsten might well be in foster care or indeed already have been adopted as the journal was already six months old. I never gave up hope, I just knew that we would end up being together.

In January 2011, the day before my assessment with the social worker, Anita rang me and said “I hope you are sitting down?” She told me that Kirsten’s profile was in the January issue of “Children Who Wait”. I felt like I had won the lottery as I had felt that she was still there and I was delighted to have it confirmed.

In my assessment the next day I told the social worker about Kirsten, and she said “We need to do something about Kirsten.” I was besotted with the child and knew that she was the one for me.

In spite of breaking both legs in February 2011, I was approved for adoption in May 2011. The social workers came to my home in June, I met Kirsten’s paediatrician and her foster parents in July.  I went to the Matching Panel in September and on 3 October I met Kirsten for the first time. We then had a week of introductions when I got to know her better. On 10 October, I brought her home. She was 3 years and two months old and we have had the most amazing time together.

I would say to any potential adopter, if you have room in your heart and house then do it. It is a life changing experience but one that is truly rewarding.